Most Heartbreaking Breakups of 2016 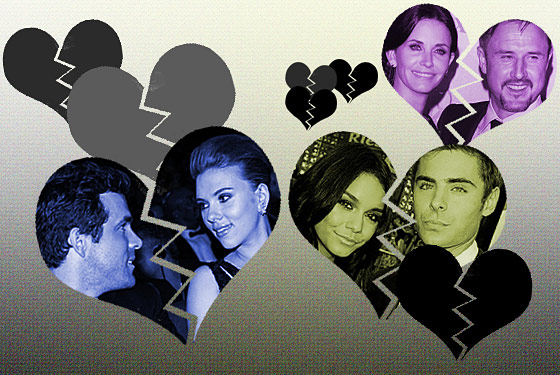 While few women would describe Zac Efron being single as a tragedy, these two were extremely cute together. Look at him giving her a piggyback rideat the MTV Movie Awards! The heart breaks. (Zac will be fine though.)

BELLA HADID AND THE WEEKND

While it’s not right to take pleasure in other people’s pain, it must be said that The Weeknd had this coming. Back in 2015, he told the New York Times that he didn’t know if he was in love with Bella, saying, “I don’t think so. Maybe. It’s no, it’s yes, it’s maybe.” Why Bella continued to put up with this fuckboy behavior for another year is a mystery, but at least we know that even models understand the pain of having to deal with men. Chin up, Bella! There are plenty of other starboys in the sea.

Demi and Wilmer dated for six years and seemed genuinely happy together, so it was a little bit shocking when they announced their split via Instagram in June. Demi later said that she felt like their relationship was too tied to her struggles with substance abuse and mental illness, so good on her for figuring out what she needed to do for her own health and happiness. “It may be nice to start fresh with somebody,” she told Glamour. “Because that person I was when I was a lot younger is not who I am today.”

If you’re the type of person who sees celebrity/non-celebrity pairings as evidence that true love can beat any odds, then this breakup was a real soul crusher. Jennifer, though a very successful and well-known jewelry designer, has never been as big a household name as Tobey, but the sweetness and longevity of their relationship served as proof that normalcy can be just as thrilling as the chase. I guess the Pussy Posse is getting back together.

They were just too beautiful for this world.

Nothing goes together like supermodels and musicians, especially when the model is a member of Taylor Swift’s squad and the musician is a friend and collaborator of David Byrne. Sadly, their love was too perfect to last, and they called it quits shortly after Cara told British Vogue that they were “completely in love.”

The only thing worse than a celebrity/non-celebrity breakup is the low-key celebrity breakup, because when you keep your relationship relatively private, you should be able to weather anything. Naomi and Liev weren’t big on PDA, but they weren’t afraid to bring their #RelationshipGoalsForAdults game to the red carpet either. Their understated elegance will be missed.

It’s the end of an era. After the infamous beginning of their relationship on the set of Mr. and Mrs. Smith, Brangelina settled down and became almost likable, carting their brood around the world, and gazing lovingly into each other’s eyes at premieres and award shows. The initial split announcement was tragic on its own, but things only got more heartbreaking as the couple’s custody battle became more public. Please excuse me, I have to go watch By the Sea and cry forever.

Ralph Lauren Men details on styling, make a call out

When is the Right Time to Start Your Family